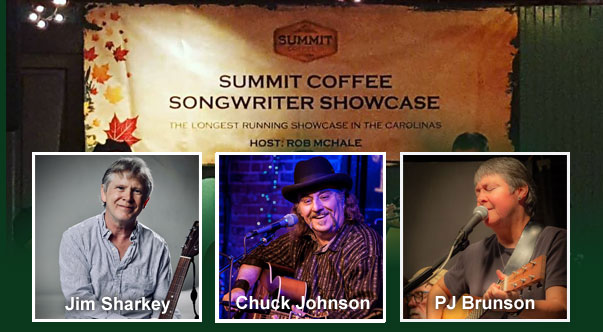 Summit Coffee, 128 South Main Street in Davidson, North Carolina is proud to present another session of the Summit Songwriter Showcase on January 9 at 7PM. This month’s showcase will feature performances by Jim Sharkey, Chuck Johnson and PJ Brunson in the round. Soundman Phil Murphy delivering the goods. 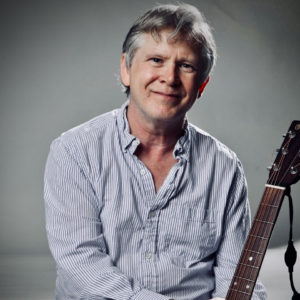 Singer-songwriter Jim Sharkey is an Irish and Americana folk musician whose original songs blend Celtic traditional ballad influences with contemporary issues that are often set in the area he resides. Jim grew up in County Roscommon, Ireland, and came to the US in 1982 when he joined the US Navy in London, England. His compositions are much like the voice with which he sings them: gentle, often introspective, and attuned to the quieter, slower-paced rhythms of small-town life. 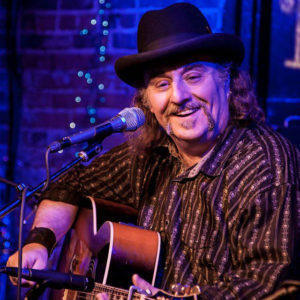 Americana music encompasses a number of broad categories these days, but in the case of Chuck Johnson, there’s only one defining factor — and that is that it remain honest and authentic. Consequently, Chuck Johnson has created a sound that shows a reverence for timeless tradition, while still managing to come across as fresh, vital and engaging. It’s an inherent ability that reflects his credence, skills, talent and dedication. 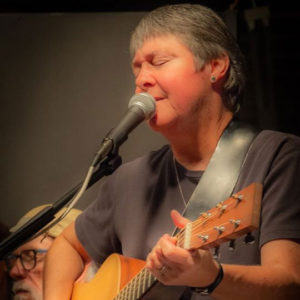 The music of PJ Brunson, a folk artist from Rock Hill, SC., has been described as acoustic … eclectic … refreshingly memorable, meaningful and fun. It’s thought-provoking, emotion-evoking, genre-bending and just-got-to-sing-along kind of tunes.

PJ embodies the best of new folk music in her singing, songwriting, and finger-picking styles. Imagine the lovechild of Joan Baez and Edwin McCain. Take a silky-smooth, sometimes-smoky alto voice, combine it with an unrivaled and impressive finger-picking guitar style.She is an accomplished musician and songwriter who has a keen ear for great new music regardless of genre. Above all else, she is an entertainer. With her easy and engaging stage presence, she has a way of reaching out and pulling an audience in, one person at a time.