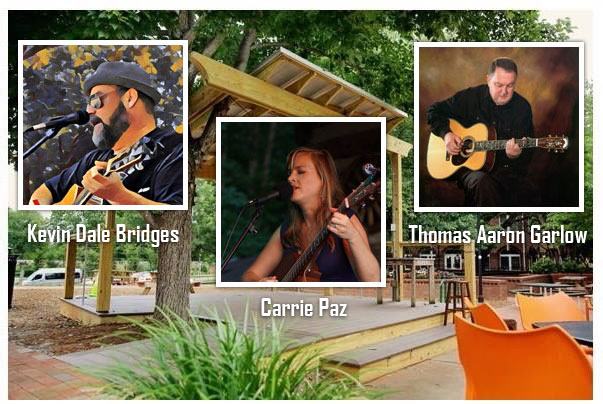 Americana singer-songwriter Kevin Dale Bridges hails from the North Carolina county that produced bluegrass legend Earl Scruggs and country music Hall of Famer Don Gibson. He was selected to be a featured songwriter and performer at the 2016 Don Gibson Songwriting Symposium for his song, Carolina Sing-Along.

Kevin weaves the rural working class cotton mill, Bible belt region of his upbringing into the imagery of his writing, creating songs of love, death and all that happens in between.
Work on a full length album begins this summer. In the meantime, Kevin has released an album his demo recordings on BandCamp.com called Demos from the Fallout Shelter, allowing listeners access to the songs at various stages of production.

Carrie Paz was born in northeastern North Carolina, where the grass is always green but the blues are at your heels. Solid ground is scarce, so she dug her roots deep into those muddy waters and eventually blossomed into folk music with a touch of the Carolina blues. Having since lived in Nashville and Chicago, and roamed from Paris to Singapore, she has now found a home in Greensboro, NC, where she writes and performs regularly at local venues and events.

Pazdziora’s music is mostly sensitive folk with a gentle acoustic guitar, more plucked than strummed, and her pure and clear voice climbing high in places, and doubled up in dusky harmonies elsewhere. The songs tend to use imagery from nature – stars, ocean, sand, wind – to sketch out sentiments of wonder at the cosmos sand our place in it, but beyond that they’re also about love and unity… (She) manages to take something that’s seemingly slight and find surprising weight to it.”
(John Adamian, YES! Weekly)

Thomas Aaron Garlow boasts a rich history in the music business that he brings with him to the present day as an artist, songwriter and performer. His musical influences take roots from his native hills of West Virginia to his current home in the mountains of North Carolina. You can hear the influence in his music. Working his summers on farms in eastern North Carolina where he spent many steamy afternoons drinking homemade corn liquor and playing the Delta and Piedmont blues with his tenant farmer coworkers, Thomas infuses his music with the rural southern life, yet has experienced a broad and unique variety of the industry.

Acclaimed for his mastery of the guitar, his style has been described as smooth and powerful. His seasoned vocals and home-spun storytelling, bring a subtle but “straight to the heart” strength and intimacy to his performances.

Previous: Tom Dooley in Music & History
Next: Lonesome Highway – Prophets on the Boulevard