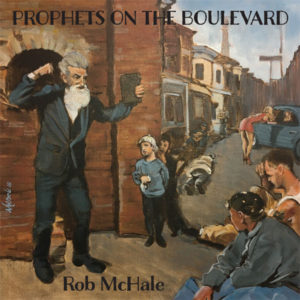 A late spring update: We spent about a year putting together the new ‘ Prophets on the Boulevard ‘ album, featuring 12 original songs and a cover of Willie Dixon’s 1961 blues tune ‘ Little Red Rooster ‘. The project was recorded in Asheville, NC with producer Chris Rosser and recorded at Hollow Reed Studio and Sound Temple Studio, with Mastering by Michael Hynes ( Nomatic Studio, Asheville, NC ). All members of the band played on the album and also dear friends Mark Mandeville and Raianne Richards chimed in on the title track from Massachusetts, Mark laid down some banjo they both laid down some vocals on the track too ( many thanks to Mark and Raianne ). http://www.markmandeville.com

Artist David Merck ( Company Town, Fields, Tom Dooley and Friends ) graced us with his excellent artwork again for the album cover. David is an amazing artist and has a unique talent for bring out the theme in the cover painting.

In March we released the album to radio, about 500 cds sent to stations around the United States, New Zealand, Canada, Australia, and Europe. The album charted at #8 with the #8 song ( Common Ground ) the #11 song ( Woody’s Shoes ) and the #23 song ( Blair Mountain ). Joan Baez charted the #1 album. Many thanks to the FM DJs around the world for their support once again.

I am just returning from performing in Scotland in late April and have a few dates coming up in May and June.

June 23rd – Festival of the Artisan – Ashbourne, England with Steve Bonham and the Long Road

“Prophets on the Boulevard is definitely one of the best albums thus far in 2018, consistently good from the first song to the last “
– Ken Nagelberg, WHYR 96.9 FM, Baton Rouge, LA

The new album is available at all major internet retailers in physical and digital forms and also right here at http://www.robmchale.com

Thank you for listening, hope to see you soon !